Lee Spencer, The Rowing Marine, crossed the finishing line today on his solo Atlantic row, becoming the first physically disabled person to row solo and unsupported from mainland Europe to mainland America. Lee has remarkably smashed the previous able-bodied record of 96 days, 12 hours and 45 minutes, gaining a second Guinness World Record during his crossing and was welcomed back ashore by his wife Claire and son Billy after 61 days at sea.

Stroke by stroke Lee has challenged the definition of disability as he rows the 3,500 miles across the Atlantic Ocean to raise funds for two causes close to his heart, the Endeavour Fund and The Royal Marines Charity.

Show your support to Lee by making a donation here.

Lee has broken the records, despite having to make a pit-stop in Las Palmas after technical issues with his navigation system. Live tweeting from the boat, Lee has been able to give daily updates to the world from the middle of the Atlantic and has received numerous messages of support from across the Corps Family and the world of entertainment and sport.

Lee was born in Dagenham, lives in Devon, but made in the Royal Marines. Despite surviving 24 years as a Marine and three tours of Afghanistan, Lee lost his right leg when he stopped to help a motorist on the M3 in 2014. He was hit by flying debris as he made his way to the stricken vehicle and his right leg was severed in the impact.

During this feat of physical and mental endurance, Lee has battled 40-foot waves in a seven-metre-long ocean rowing boat. Suffering from sleep deprivation, extreme fatigue, sea-sickness, fear and solitude Lee will be out of helicopter range and totally unsupported on the water.

Lee feels passionately about keeping wounded servicemen and women at the forefront of people’s minds alongside challenging the embedded preconceptions that impact all those with disabilities. The double Guinness World Record attempt will raise awareness and money for the Royal Marines Charity and the Endeavour Fund, which supports wounded, injured and sick Service Personnel and Veterans using sport and adventurous challenges as part of their recovery and rehabilitation.

All at The Royal Marines Charity would like to congratulate Lee on his truly hoofing achievement and remarkable efforts for the Corps Family. To support his efforts, please donate to his online fundraising page here. 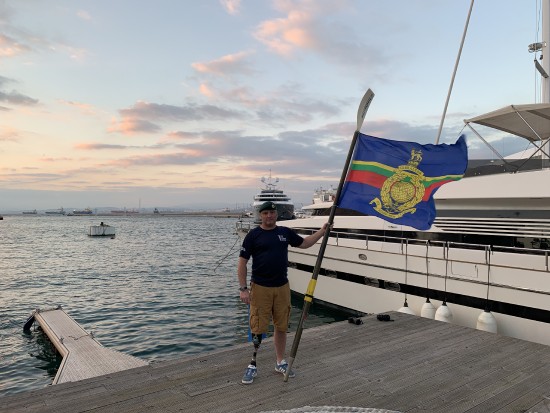 Join us in 2020 for an incredible three-day trek along the World War One Western Front for RMA - The Royal Marines Charity. Meeting at the Imperial... Read More »